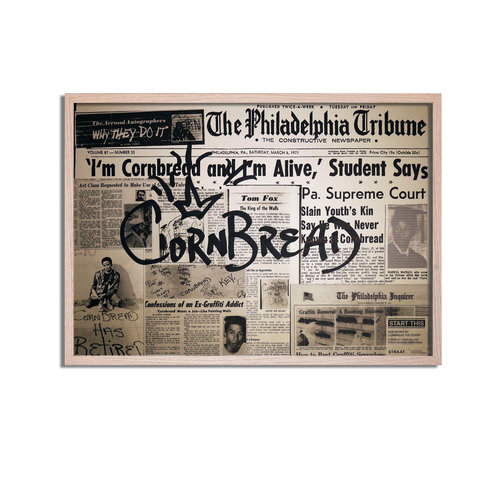 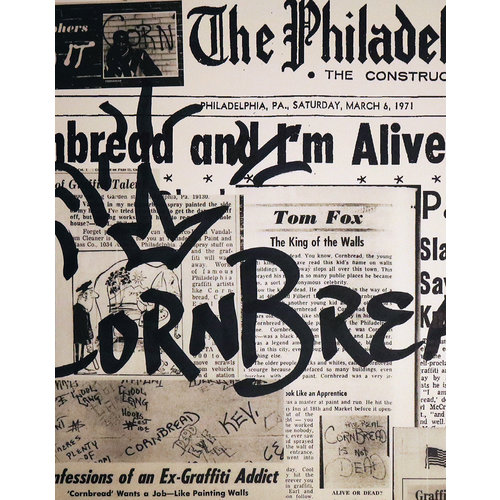 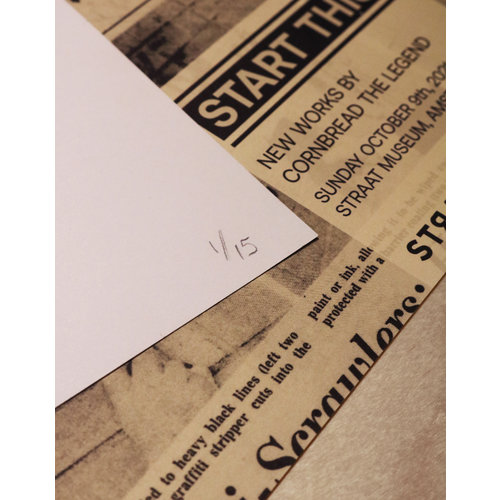 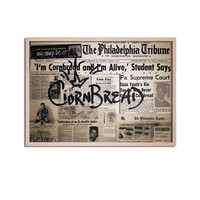 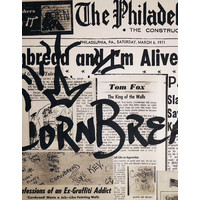 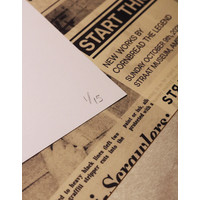 €200,00
50 x 70 cm print, on 170 gr paper, a composition of historic newspaper clippings featuring Cornbread tagging Philly the 60s and 70s. Tagged by Cornbread himself in 2021 at Straat museum, Amsterdam, in a limited edition of 15. Excl frame.
Beschikbaarheid:
Op voorraad
Delen:

Darryl McCray (American, b.1953), better known by his tagging name "Cornbread", is a graffiti writer from Philadelphia. He is widely considered the world’s first modern graffiti artist, starting with a distinct, non-gang related, tagging style in 1965.

‘Most people make the assumption that New York City birthed graffiti. While the Big Apple certainly made it famous, the credit actually goes to a Philadelphia legend, CORNBREAD, whose unique tag resonated through the City of Brotherly Love beginning in the late '60s.’ - Alec Banks for Rock The Bells.

After a stint in a juvenile corrections center, where he garnered the name Cornbread from the chef who, despite Daryl’s repeated requests, refused to make the stuff, the legend was born. His first big ‘campaign’ was ‘Cornbread Loves Cynthia’. This was a bold declaration of love for a girl in his class at Strawberry Mansion Junior High School. He wrote it everywhere along their walking route home. This later became the inspiration for ESPO’s world famous mural series of ‘Love Letters’ along Philadelphia’s famous Market-Frankford train line.

In 2007, documentary filmmaker, Sean McKnight, made a film called Cry of the City Part 1: The Legend of Cornbread. In August 2013, McCray was honored at the Graffiti Hall of Fame in East Harlem for his contribution to hip-hop culture. His work is included in the seminal exhibition ‘Beyond The Streets’ curated by Roger Gastman.

Among his greatest graffiti feats he is known for tagging a touring jet belonging to the Jackson 5 and sneaking into the Philadelphia Zoo to tag an elephant, an act later ‘borrowed’ by world famous Street and Conceptual Artist, Banksy. In a 2020 interview, Cornbread has this to say about the zoo action, “I was on the bus one day, reading the newspaper and it said ‘Cornbread is shot to death,’" he said. "I knew I had to do something amazingly bizarre to let people know I wasn’t dead. So I go to the zoo. It’s a big tourist attraction. I watch the zookeeper shower the elephant with a hose, watch him tug on his flappy ears, and pat his side. The elephant is tame. I saw the zookeeper was not in danger. After three days of watching this, I go to the zoo early in the morning, climb over the fence, into elephant’s enclosure. I take the top off the spray paint, start shaking. The balls start rattling. He turns around, he looks at me, doesn’t pay attention. I paint ‘Cornbread lives’ right on his side."

More than half a century after the legend was born, Cornbread uses his platform and fame to advocate for young, local Philadelphia artists who share his passion for art. He works closely with Philadelphia’s highly influential and successful city program, Mural Arts.